Iconic species such as guitarfish are facing extinction

Sharks, rays and chimeras are now the second-most threatened vertebrate group, after amphibians. In a recent study, we found that over one-third of sharks and rays are threatened with extinction. Our findings are a wake-up call.

When the International Union for the Conservation of Nature released its updated Red List of Endangered Species in September, it included our latest assessments of the status of sharks and rays. These species are more at risk of extinction than previously thought.

As lead assessors of the IUCN Shark Specialist Group, we reassessed the extinction risk of all species of sharks and rays. This eight-year project took hundreds of experts from all over the world to compile the data we needed to shed light on the status of sharks and rays. Unfortunately, the data told us that we may be seeing the beginning of the end of their 420-million-year reign over the oceans.

Nearly all species of sharks and rays (99.6 per cent) are captured in fishing operations and all threatened species are imperilled by overfishing. Shark and ray populations are in free fall, with little effective management to halt or even slow down their decline.

Whether the capture of sharks and rays is intentional or not, most species end up being retained at some level to be eaten or processed into animal feed. The skins of sharks and rays are made into leather for apparel and accessories (wallets and belts) and the liver oil is used for pharmaceuticals, cosmetics and even as a form of biodiesel.

Even if some species are discarded and thrown back into the ocean after they are captured, there is still some unknown level of mortality due to the stress of capture and exposure to air while lying on the fishing boat deck.

Sharks and rays are not just being overfished. Approximately one-third of threatened species are imperilled by habitat degradation, primarily due to coastal development and the removal of mangrove forests to make way for prawn farms.

For the first time, we are now also seeing that climate change is overheating the tropical parts of their distributions and some species are also affected by the bleaching and death of coral reefs.

Pollution is a lesser contributor and connected to only 6.9 per cent of threats, mainly to rays and sharks living in freshwater and estuaries.

Iconic species at risk of extinction

We can now pinpoint where the most shark and ray biodiversity is being lost. On average, 75 per cent of coastal sharks and rays are threatened, and the percentage is much higher (80 to 85 per cent) in the tropics and subtropics due to pressure from large and small-scale fishing fleets resulting in higher levels of estimated fisheries landings there. 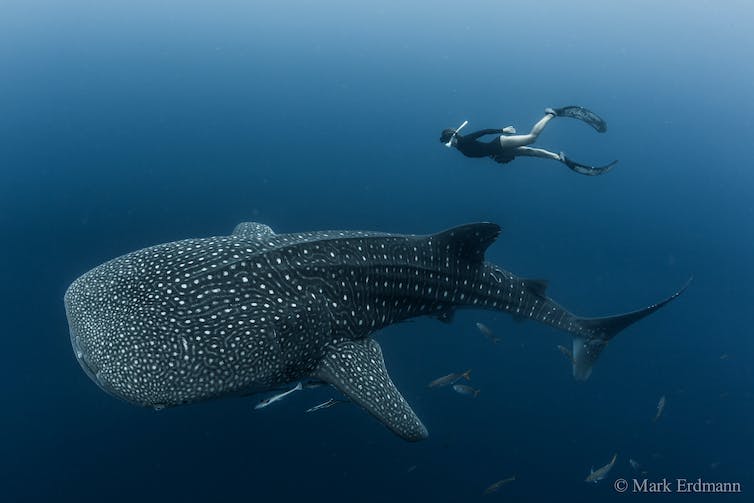 Large species like the whale shark are at greater risk of extinction because they grow slowly and produce few young. (Mark Erdmann), Author provided

The larger species are most at risk as they have less capacity to replace the numbers taken by fisheries, because of their tendency to grow slowly and produce few young. Consequently, we risk losing the largest most iconic species, such as sawfishes, wedgefishes, guitarfishes, devil rays, eagle rays and hammerhead sharks.

Where fisheries are most intense, these iconic species are long gone, such as sawfishes in West Africa, or very recently disappeared such as wedgefishes in United Arab Emirates and Bangladesh. The catch is now dominated by the smallest and least economically valuable species, such as bamboo sharks, smooth-hounds and stingrays.

Good news on the horizon

It is not all bad news. Three species have genuinely improved since the last assessment, and they point to a general solution: science-based fishing quotas or closures in their respective ranges.

Fishing limits on the Atlantic coast of Canada and the United States are considered key factors in the rebuilding of the populations of smooth skate and barndoor skate, but further work is needed to better understand the lessons to be drawn from these recoveries. 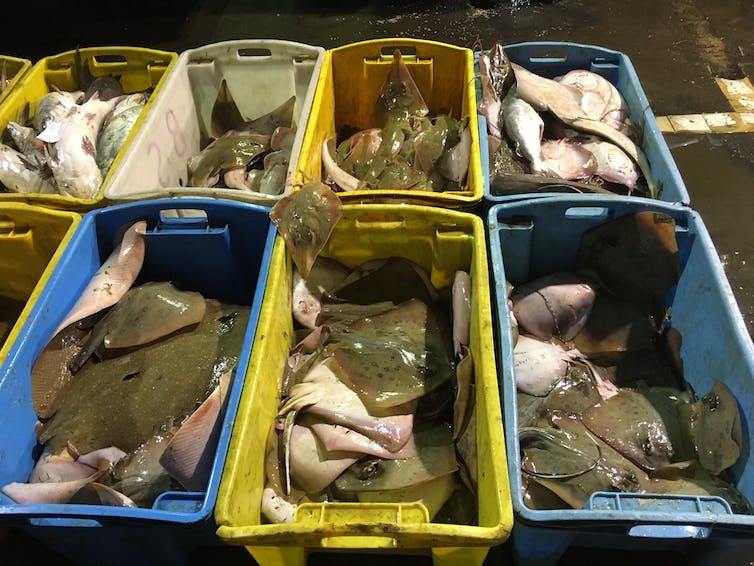 Fishing-related mortality of sharks and rays needs to be reduced to reverse declining trends and recover species before more species are lost. In particular, concrete limits on catch, based on scientific advice, and the precautionary approach are urgently needed to minimize mortality of imperilled species and ensure sustainable exploitation of others.

Area closures to further restrict fishing and protect habitats can augment catch limits and improve the chances of recovery for sharks and rays. Recovered and abundant populations have three main benefits. They are more able to perform their vital ecosystem roles, they are more capable of withstanding climate change, and they also yield sustainable catches to support the nutrition and livelihoods of the world’s poorest people.

Immediate first steps include restricting landings, protecting important habitats and diversity hotspots, as well as implementing fisheries and wildlife treaty obligations. If more species are able to recover with better management, this will protect the future of global fisheries.

This article is republished from The Conversation under a Creative Commons license. Read the original article.

AROUND THE WORLD IN 80 WRECKS - DIVE's 70-page, beautifully illustrated, colour guide to the world’s best wrecks

SCUBA STORIES - DIVE's collection f real life stories where divers, who have got themselves into perilous situations, describe how they reacted and what actions they took to ensure they lived to tell the tale

Need inspiration for your next dive trip? Try one of our featured destinations from DIVE's travel partners.

DIVE magazine is available to read on many devices. Simply click one one of the options below

Get updates of all the diving news plus all our latest offers and competitions in our regular newsletters. We never share your data. Unsubscribe anytime.

Simply give us your best email address in the box below to stay connected.

Press the Apple or Android image below to download the DIVE app for your device or the PC/Mac image to read DIVE on your desktop. DIVELive is free, full archive available to digital subscribers